Which refrigerant gases can you work with?

We have a dual recharge machine which means that we can work on the air-con systems of vehicles with both the older R134a refrigerant and the new R1234yf.  R1234yf was introduced on some vehicles from 2011 but was a compulsory replacement for R134a on vehicles manufactured 1st January 2017 onwards.

How does the air conditioning system on my car work?

There are 5 main parts that make up the system…

Condenser:
The condenser is a radiator, normally with one or more of its own electric cooling fans. The condenser cools the high-pressure refrigerant gas, which has come from the compressor and transfers it in to a liquid, expelling the heat in to the atmosphere.

Receiver/Dryer:
The receiver dryer sits in line with the outlet from the condenser and captures any moisture or contaminates which if left to circulate in the system would cause damage to other air conditioning components.

Expansion Valve:
Next in line is the expansion valve. This part reduces the pressure causing the refrigerant to be reverted back to a gas from a liquid, which causes rapid cooling.

Evaporator:
This part is buried deep underneath the dashboard and is where the now highly cooled refrigerant absorbs the heat from inside the vehicle by way of the air being pushed over the outside of the very cold evaporator.

How often should I recharge my cars air con system?

We recommend that you have the system recharged every 2 years. This is in line with most manufacturer recommendations.

Why does it need to be recharged?

Most modern vehicles have an air conditioning or climate control system and that is just as important to maintain as any other system on the vehicle. Around 10-15% of the systems refrigerant can be lost naturally every year. Air conditioning repairs can be costly and largely caused by a lack of regular maintenance i.e. low refrigerant. Low refrigerant can result in the compressor being asked to work much harder than it’s designed to do in order to maintain the required pressure to run the system. Running an air conditioning system with low refrigerant is like running your cars engine with low engine oil, which results in high friction levels and prematurely worn parts.

How much does it cost to recharge the air con system?

This involves recovering the refrigerant that remains in the system; a vacuum test and recharge to the vehicle-specific refrigerant level including oil if required and UV leak detection dye. 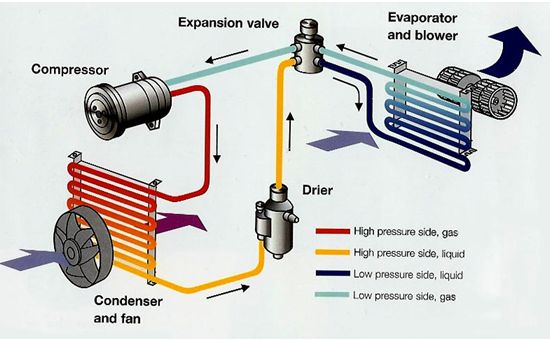 How long does a recharge take?

A system recharge/regas normally takes around an hour to complete.

I think my system has a leak. Can you help?

Yes, we are fully equipped to investigate air conditioning leaks. If the performance of your air con system has deteriorated we would first suggest having the system recharged which will determine how much refrigerant was left in the system and also perform a vacuum test for major leaks.
Should a major leak be present then the system will require a Nitrogen leak detection test, which we can carry out for £50 plus VAT.
If the system passes the vacuum test then a recharge will be carried out and a UV leak detection dye will be added. If you feel the system start to deteriorate again then we can then inspect the components with a UV lamp to trace the cause of the leak.

Do you carry out air conditioning repairs?

Yes we do, no problem at all. Repairs are individually priced so please contact us for information.

Are your staff qualified to work on my vehicles air conditioning?

Yes, all of our staff are qualified to the legally required standard and hold current IMI Awards or City & Guilds qualifications in Mobile Air Conditioning Refrigerant Handling.
The refrigerant used in a vehicles air conditioning system is very dangerous if handled incorrectly and also very harmful to the environment so it is imperative that anyone working with such a refrigerant is properly trained and qualified to do so.

Tutts of Dorking is open and operating as normal, with COVID safety measures in place.